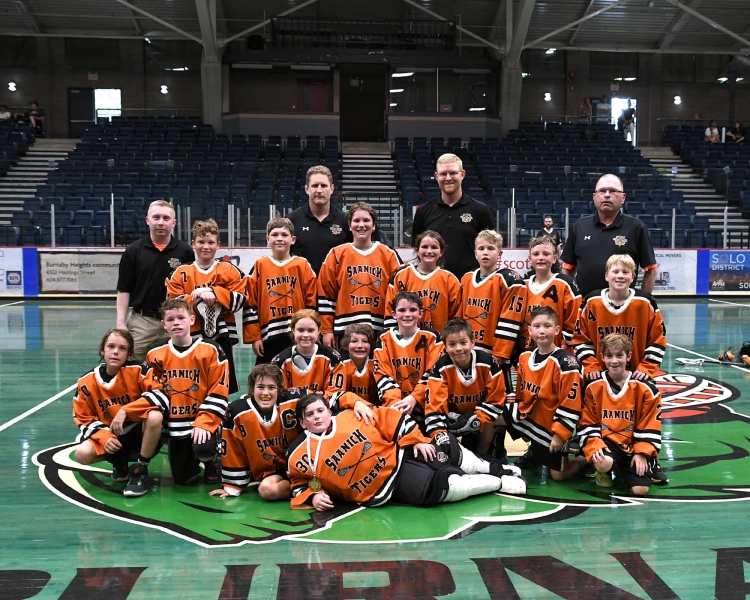 It’s been a great return to Lacrosse after two years away – the executive would like to thank all the coaches, managers and team personnel for making this season a success. A few highlights from the season:

We received a nice note from an opposition Novice team participating in the JDF Tournament:

“I wanted to reach out and thank your coaches for everything they do.
There was a tense few moments where the game was getting a little rough. At the first stop in play, one of your coaches (Pat) stepped out on the floor and asked our bench if he could stop the game for a moment so he could address his players all at once, without distractions. This showed me that he was not only looking out for his players, but ours as well. That is the kind of coaching that this division needs and I would like to personally thank him and the Saanich Tigers for it.”

The Chair of the Tim White (Nanaimo) Bantam Tournament and the VIMLC BCLA Zone Rep also sent emails commending the sportsmanship of both the Saanich teams in the tournaments. Thank you to team managers Cyrstal Fulber and Jen Majorki for encouraging our players to personally thank the Chair and for the gifts provided to the tournament hosts.

The Pee Wee A2 team went 5 – 0 in the round robin and was in the gold medal game.
We had the lead in the 3rd, but a heart-breaking goal with 38 seconds left tied the game
and threw the momentum to Kamloops. They scored in OT and we ended up with
Silver. A disappointing ending, however, it was a great experience and the
boys should be proud of how they played and carried themselves throughout the
tournament.

The Bantam A2 team won gold in the Provincials. After losing to PoCo a few times
during the season, they played with determination when it counted and won 6 – 3 in the
gold medal game.

Our Novice Select team played in the Jack Crosby tournament. This team had great
skill and 8-9-year-olds played with grit. This age division is well set for playing
competitive lacrosse in the seasons to come. They won the gold over Nanaimo in the
finals. The team also won the most sportsmanlike team in the tournament.

The BCLA selected James Hall as the 2022 Vancouver Island Box Lacrosse Player of the Year.
The SLA nominated James, a member of the U16 A2 team, for this award. James has been coached by Fred Jenner since Pee Wee and Fred had the following to say:
“I have been coaching James since Pee Wee lacrosse and I can’t think of a player more deserving of this award. James has earned either the Captain or Assistant Captain honour each year I’ve coached him. And that honour comes from his willingness to do whatever it takes to make himself, his teammates or his team better. If I asked him to play on the power play or short man or sit in the penalty box for too many men call… he’d do it. And wouldn’t hesitate.
James always helps out his teammates during practice to understand plays or drills, as he knows that if they get better, the team will get better.
Throughout every practice or game, James has a smile on his face. No matter what. He truly loves to play this game and has the utmost amount of respect for the game, his teammates and his opponents. He truly is a kid that just loves to play, and I love watching him play.”

James has also been a referee in past years. Head Referee Ryan White had the following to say:
“James demonstrated great composure and confidence when he ejected a parent in one of the first games back in the shortened 2021 COVID season. For a new referee to hand a difficult situation was impressive.”

The Saanich Lacrosse Association Executive is committed to providing the best possible lacrosse experience for your player. This survey is designed to gather feedback from parents and players on the 2022 Season. The survey is anonymous and your responses will only be shared in general terms with the coach or manager if applicable. Your time to complete this survey is appreciated and is important to the Executive.
SURVEY: https://forms.gle/GKusZtFGijYENAXEA